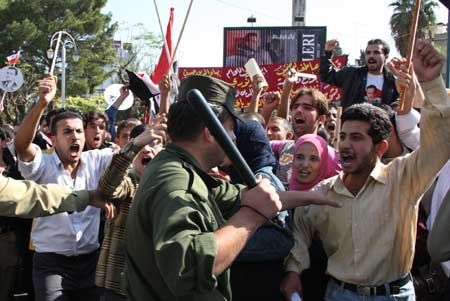 The recent attempts by anti-Israel extremists to break Israel’s naval blockage of Gaza and to flood Israel’s airports with troublemakers have failed.

The ships of fools, knaves, hypocrites, bigots, and supporters of terrorism that tried to sail from Greece have now apparently been run aground. Most of the hard-left extremists have gone home following a decision by the Greek government to prevent the boats from leaving Greek ports.  And those who tried to flood Israel’s airports are being deported.  The resulting fiasco, which was designed to discredit Israel, has succeeded only in discrediting the Israel-bashers on the boats and planes by exposing their true purpose.

The alleged purpose of the ships was to feed the starving Arabs of Gaza. The problem is that the Arabs of Gaza are not starving. Nor are they in need of outside help.

According to reporting by The New York Times, Gaza has been thriving recently. Luxury hotels are being built; stores are stocked with food; beaches are filled with children; and life is far better than in neighboring Al Arish, which is across the border in Egypt.

In fact, according to news reports, the residents of Gaza are far better off than the residents of many Arab areas in the Middle East. Medical care is better, infant mortality is lower, longevity is higher, employment is increasing, cars are plentiful, food is more available and the quality of water and air is higher. The Gross National Product has risen dramatically over the past year.

To be sure, the citizens of Gaza do not have freedom of speech, freedom of religion, freedom of the press, the right to dissent or the ability to join political parties that are out of favor. These limitations are the fault of Hamas, not of Israel.

Indeed, the only Arabs in the region whose lives, in every respect, are better than those who live in Gaza, are the citizens of the West Bank, which is controlled by the Palestinian Authority rather than Hamas.

So if the fools on the ships were really interested in helping Arabs who are truly in need of food, medicine and other provisions, they would set sail for ports in Egypt, Syria, Lebanon and other areas of the Middle East. But these hypocrites have no interest in helping the downtrodden. Their only interest is in delegitimizing the Jewish state of Israel.