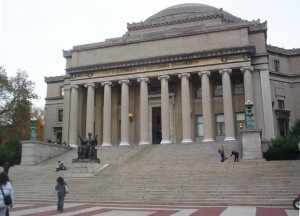 On the weekend of October 14-16, 2011,  “Students for Justice in Palestine” (SJP), which unfortunately has chapters at dozens of major American universities, will be holding a three-day event at Columbia University to train students from across the nation in advance of the upcoming “Israel Apartheid Week.”
http://sjpnational.org/program-2/
http://sjpnational.org/endorsements/

ACTIONS:
1. All Americans, and especially Columbia alumni constantly urged to support the university financially, should inquire why Columbia is allowing this SJP group to feature “Immortal Technique”, a rapper who extols and incites violence and criminality, spews brutal anti-American vitriol, and is a condemner of Israel,  a distorter of 9/11 facts, a supporter of death row cop-killer Mumia Abu Jamal, and a fan of the Nation of Islam, among other repellant views. Ask President Bollinger and the Board of Columbia to view these videos and decide if they are proud of having their university associated with the kind of promotion of violence, hate, and disgusting rhetoric we see here:

http://www.youtube.com/watch?v=Rhflst_fk2U
http://www.anysonglyrics.com/lyrics/i/Immortal-Technique/Bin-Laden-Lyrics.htm
2. Tell Bollinger and the Board that they are turning Columbia, a university once known for its rigor and academic excellence, into one that instead is gaining the reputation of a sell-out to ugly hatred and flaccid standards.
3. Further, the SJP event, NCJA believes, violates Columbia University’s own code of “Civil Behavior and Community Standards”:

http://www.gs.columbia.edu/academic-integrity-and-community-standards “It is expected that in and out of the classroom, on and off campus, each student in the School of General Studies will act in an honest way and will respect the rights of others. Freedom of expression is an essential part of University life, but it does not include intimidation, threats of violence, or the inducement of others to engage in violence or in conduct which harasses others. Conduct which threatens or harasses others because of their race, sex, religion, disability, sexual orientation, or for any other reason is unacceptable and will be dealt with very severely. For all to benefit from the diversity to be found at Columbia, all must live up to these standards.”

NCJA believes that even publicizing that a featured guest such as “Immortal Technique” will appear at an event at Columbia University can be perceived as intimidating to Jewish and other students, and his presence could induce others to engage in violence or incite conduct that threatens or harms others.

Of course, we will not be surprised if we hear from President Bollinger and the Board that this is just a “student group” and the university is “not involved” and that this is “the free expression of ideas,” “intellectual freedom” or even “art”.  But we can no longer accept these excuses for what appears to be pure hate and efforts to intimidate pro-Israel Jewish students and others who do not agree with SJP’s views. We need to know if Columbia University is providing any financial or other support to SJP and this event, including providing the building in which Immortal Technique is performing.

Office of the President of Columbia University, Lee Bollinger:

3.  Ask Hillel why they are failing to stand up against hatred and the incitement of violence against Israel and Israel supporters.

4.  Join NCJA’s Education and Campus Life Task Force to address these concerns on campuses around the country: contact natlconference@gmail.com. Forward and post this action alert.